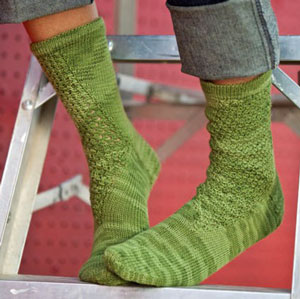 Amy Palmer, editor of Knitscene magazine, just happened to design one of my favorite sock patterns, the Wasabi Peas socks. She’s here today to tell you her design story.

You could say I tripped into designing knitted socks. Before coming to work at Interweave, I’d knit loads of socks, but I hadn’t ever designed or written a pattern a pair of socks until I tackled the Wasabi Peas socks from Interweave Knits Spring 2010. Eunny Jang, editor of Interweave Knits at the time, was incredibly encouraging and supported me when I came to her with a half-formed idea for socks that used a cool stitch pattern and different gusset decreases.

Wasabi Peas were mostly an experiment—I’d just read Cat Bordhi’s New Pathways for Knitted Socks and I really latched on to the idea that gusset decreases can literally be placed anywhere on a knitted sock foot. There are suggested ratios and some math and general guidelines to follow, but as long as you have enough fabric to stretch over the diagonal formed from the bottom of your heel to the top of your ankle, the rest is technically up to you. 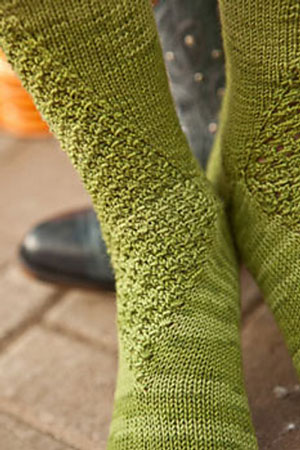 I knew that I wanted to incorporate this idea into a knitted sock pattern—but everything else was dreamed up along the way. I poured over stitch pattern books, looking for a pattern that I wanted to incorporate into a pair of socks, and the cluster stitch I ended up with spoke to me. I felt knitting the cluster stitch over the entire leg was a bit overkill, but I also wanted them to start on the sides and end up on the top of the foot, so I set them into a column that travels around the outside of the leg and onto the top of the foot, before generally narrowing down through the gusset decreases.

I chose to start with the folded hem because the clean lines appealed to me, though if we’re being really honest (you know, knitter to knitter), it was mostly because the ribbing flowing into the cluster stitches kind of bothered me, aesthetically.

I’ve seen finished projects where people changed this hem to a plain ribbed hem, so don’t be put off by the idea of a provisional cast-on to get the hem turned. That’s one of the great things about knitting socks—so many options to customize them and make them our own, even when following a pattern.

By the way, the name Wasabi Peas was kind of an accident—the yarn color was called “wasabi” and I thought the clustered stitches looked like peas, and apparently Eunny thought it was amusing enough to leave it.

What drew me to these socks in the first place was the interesting angle of the cluster stitch pattern—I really like how the stitch pattern comes to a point on the foot of the sock. Plus I love to snack on wasabi peas, so I thought I should check out their namesake pattern.

Download your Wasabi Peas sock knitting pattern, and cast on these wonderful socks.