Sweater Workshop: The Manicouagan Pullover (it's a free pattern!)

I love drop-stitch knitting patterns. It's so much fun to drop the stitch! It feels so wrong, even though I know it's right.

The drop-stitch patterns I've knitted are all scarves, so imagine my delight when I came across a drop-stitch sweater! It's Alex Capshaw-Taylor's Manicouagan Pullover, from Interweave Knits Winter 2014.

This sweater is what happens when the steam-punk style meets the classic Henley pullover. Because I'm me, I got curious about the origin of the Henley style, so I did a little research. Apparently, the crew teams of the English town of Henley-on-Thames wore shirts that were collarless with a button placket below the round neckline. This style became popular with the masses and the Henley was born.

Anyway, the Manicouagan sweater was featured in the very first episode of Knitting Daily TV with Vickie Howell, where Knits editor Lisa Shroyer explained the ins and outs (and drops!) of the pullover.

The sweater is knit from the bottom up, in pieces. After knitting the ribbing, a lifeline is drawn through all of the stitches. This is to keep the drop stitches from raveling all the way through the ribbing. The lifeline remains in the finished sweater, holding up those dropped stitches, which is a pretty neat trick. Here's what the process looks like:

The Manacouagan Pullover is such a unique design, and it's a great three-season addition to your wardrobe! In the KDTV episode that this was featured in, Vickie said she would be able to wear it in the warmer climate of her home in Austin, Texas.

The Manacauagan Pullover is a free download, so get your pattern now. With this sweater workshop, you're all ready to cast on!

These sorts of patterns and in-depth how-tos are what you get in Interweave Knits. If you're not already a subscriber, jump on board and subscribe today! You won't regret it.

P.S. Drop-stitch patterns: yay or nay? Cast your vote in the comments! 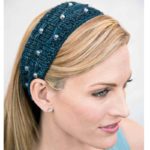