Spinning The Rest of The Story

So many of you wrote in to compliment me on "my very first yarn" that I felt a teensy bit guilty. These posts are so short that sometimes I have to leave out parts of the story in order to fit in the really important stuff.

But this time, I realized that perhaps the "rest of the story" WAS really important, that it actually holds the key to just how important Maggie's class was to me, as a knitter and as a spinner. So now, here's the fabled Rest of The Story…

I actually learned to spin about fourteen(ish) years ago, back when I lived in California. I bought an Ashford Traditional wheel, dozens of drop spindles, and had an absolute blast spinning every fiber I could get my hands on. The yarn I spun was lumpy, bumpy, and, uh, "full of personality," —not at all like the lovely smooth yarns I dreamed of spinning. I always felt as though I was missing some Secret of Spinning that would enable me to make those "real" yarns, but I never could figure out what I was doing wrong. I was confused by all the fancy-dancy spinning terminology, and I felt like I was fighting with my wheel every time I tried to adjust it. Although I loved spinning, I came to the conclusion I was just really bad at it.

Then a car accident left me with a hand injury, an injury that when all was said and done left me with only partial use of my left thumb and forefinger. I managed to re-teach myself to knit and crochet and do beadwork, but no matter what I did, I couldn't manage the spinning anymore. My left hand was my dominant hand for spinning, you see, the hand that did all the pinching and clever stuff up front. Now that the hand wasn't being particularly clever, my bad spinning got worse, and, well…I gave up.

Not terribly fearless of me.

This is where Maggie comes into the picture. After years of thinking I would never spin again, a friend at work recommended I take Maggie's class, saying that Maggie knew so much about spinning that she was often able to come up with alternate ways of doing things. 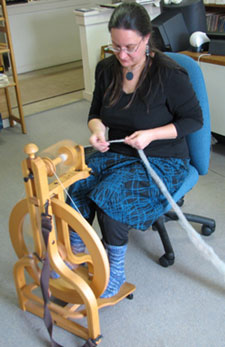 The best way to spin? In handknit socks!

Which is exactly what Maggie did. She taught me to spin so that my "good" right hand did all the clever work, and my "not-so-good" left hand was just hanging out there back stage, to guide and supervise and provide running commentary. It was tough at first, because my brain, which thought it knew what it was doing, had to become a bit humble, and realize that it needed to be completely retrained now that I was learning to do everything the opposite of how I had originally learned to do it.

The point is: Maggie was able to teach me to do that. And when I spun my first smooth, fine yarn, yarn that looked like REAL yarn, I felt as though she had given me back part of my knitter's heart.

We all have obstacles to overcome in our crafting. In my beginning spinning class, there were several folks who had been to previous spinning classes, and like me, thought they were simply bad spinners. One woman was fighting with her wheel, and Maggie helped her learn how to adjust it. One woman had had a rather cranky teacher who had discouraged her. Maggie helped her spin a lovely two-ply yarn with confidence. And the true beginners in the class, the ones who had never held a drop spindle or sat before a wheel in their lives, well. They came in saying "I'll never be able to do this" and yet they left with hanks and skeins of beautiful handspun, dreaming of what they would knit with the yarn they had made.

If you want to do something, find a teacher. If that teacher doesn't give you confidence, find another teacher. If there are no teachers nearby, find a good book. Find a way to do what you yearn to do. The world's a better place if you are doing what you love. 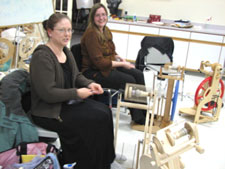 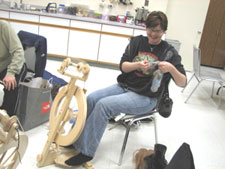 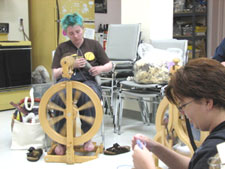 I know Maggie lives here in Boulder, and most of you cannot make it to her classes. If you'd like to learn to spin, or if you'd like a refresher course in everything from handcarding to fixing yarn with too much twist, Maggie's new book, Start Spinning, is almost as good as having Maggie sitting right next to you. It's filled with step by step photos of Maggie herself demonstrating each technique; the instructions are so clear that it's like having a spinning cookbook as you learn the delights of fiber and wheel. My copy is already a bit battered, and I've only had it for a few weeks. Plus, it now has the ultimate Sandi Seal of Approval: page 52 in the Troubleshooting section has a chocolate smear on it.

If you want to hear more about Maggie's passion for teaching spinning, there's a conversation between Amy Singer and Maggie in the Spring 2008 issue of Spin-Off magazine.

Sandi Wiseheart is the editor of Knitting Daily.

What's on Sandi's spinning wheel? Beautiful hand-dyed alpaca roving from SakinaNeedles, which I am spinning very fine, about 38 wraps per inch.

Discover The Secrets of Yarn: Learn to Spin!