Keeping up with the scene: 5 New Patterns from Knitscene Designers

Lisa and I are hard at work, racing to our deadline on Knitscene Winter/Spring 2011, but I thought I'd take a quick break to see what some of our designers from Knitscene Fall 2010 are up to.

Our featured designer, Hannah Fettig, has been hard at work, designing two patterns for Interweave Knits Weekend 2010 (the Mariner Pullover and the Tree Line Cardigan), as well as self-publishing a few other designs, including the Mediumweight Pullover through her store. This sweet cowl neck sweater is stamped with Hannah's signature style!

Melissa Wehrle is an incredibly prolific designer, and her Aryn Tunic Cardigan is a favorite among Knitscene readers. Since Knitscene Fall 2010 was published, Melissa's also published the Elementary Vest in Interweave Knits Fall 2010, as well as the drop-dead gorgeous Origami Shrug from Brave New Knits.

As I mentioned a couple weeks ago, Elinor Brown's Northumbria Cowl would make a great stash-busting project (or holiday gift!). Elinor is the Queen of great stashbusting colorwork projects. Her Slanted Peerie Mittens from Interweave Knits Holiday Gifts 2011 are on the top of my Must Knit List, and I just love her Forest Mushroom mittens from twist collective's winter issue and her self-published Ladybug Picnic Mittens. 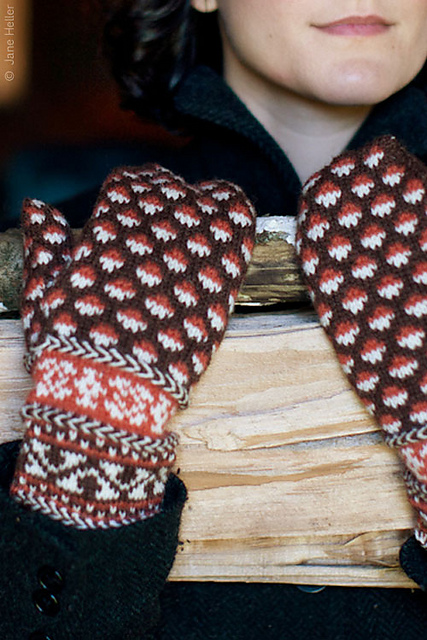 Every once in a while, sock knitters like myself have to come up for air, and Debbie O'Neill is no exception. Her Brise-Soleil Cardigan from Knitscene Fall 2010 is such a fabulous study in lace and asymmetry. Since then, Debbie's been hard at work on a few more designs for us (in fact, she's our featured designer for Knitscene Winter/Spring 2011!), as well as churning out sock patterns left and right, such as this revision of her Cascading Leaves socks.

This is just a small sampling of what some Knitscene designers have been up to. We're so lucky to work with amazing designers day in and day out, and as much as we love seeing what designs they make for us, we get just as excited seeing what they're doing on their own. The Fall 2010 issue is on sale for a few more weeks; grab a copy and check out what our other designers have been knitting!

'Till next time, happy knitting.
amy

P.S. – Have you knit any patterns from Knitscene Fall 2010? How about any other patterns from our fabulous designers? Let me know, either in the comments or on Twitter! You can find me there as AmyPalmerKnits.