Faux Isle: A Great Colorwork Technique (plus a free pattern!) 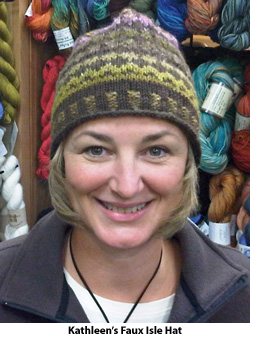 There are so many beautiful variegated and self-striping yarns out there. They're perfect for adding some pizzazz to your stockinette projects, but have you thought about doing some colorwork with these yarns?

The term "faux isle" is a funny play on words, but it's also a neat technique that uses one variegated or self-striping yarn and one solid yarn to knit a Fair Isle-type pattern.

I'm working on a faux isle hat (at left) for my brother for Christmas, and it's so much fun. Like all of the colorwork I've done, it's really addictive—I can't wait to see the next row!

I developed my own easy knitting pattern for this hat, which my friend Deborah kindly modeled for me—she's one of those people who looks great in hats of all kinds.

This is today's free pattern, so read on!

This hat measures about 18 1/4" when finished, and fits about a 20" head. For a larger head, cast on more stitches in multiples of four.

Your gauge should be 21 stitches to 4 inches in stranded knitting.

Note: After making this hat a few times, I've decided I don't like the two rows of stockinette (brown, in the hat shown at left) and the half diamond right above the brim of the hat. The hat is also just a tad too long (tall??) on most people. So, I would advise skipping chart A and starting right in with chart B.

Using worsted weight yarn (you'll need about 100 yards of a variegated yarn and 100 yards of a solid yarn) and size 6 US 16" circular needles, cast on 96 stitches in the solid color (Yarn A).

Place a marker at the beginning of your work and join for working in the round.

Knit 3 rounds in Yarn A.

Knit 2 rounds in Yarn B, and then work rows 1 through 8 in Chart A.

On row 9, switch to Chart B, repeating rows 1 through 6 of the chart until the hat measures about 6" from the cast-on edge (or to desired length minus 2 inches).

Using just one of the yarns (A or B, you choose!), begin decreasing crown as follows:

Weave in ends and block lightly.

Fill Up Your Basket With Faux Isle

Faux isle projects really give you a lot of bang for your buck; because of the variegated yarn, it looks like you're using several colors, but you're just using two colors throughout the whole piece. I enjoy Fair Isle projects, both the process and the product, but this faux isle technique is so easy (not so many ends to weave in!) and beautiful in its own right.

Here are some ideas for your project basket.

Have a wonderful weekend!