Correcting for the Jog in Stranded Knitting 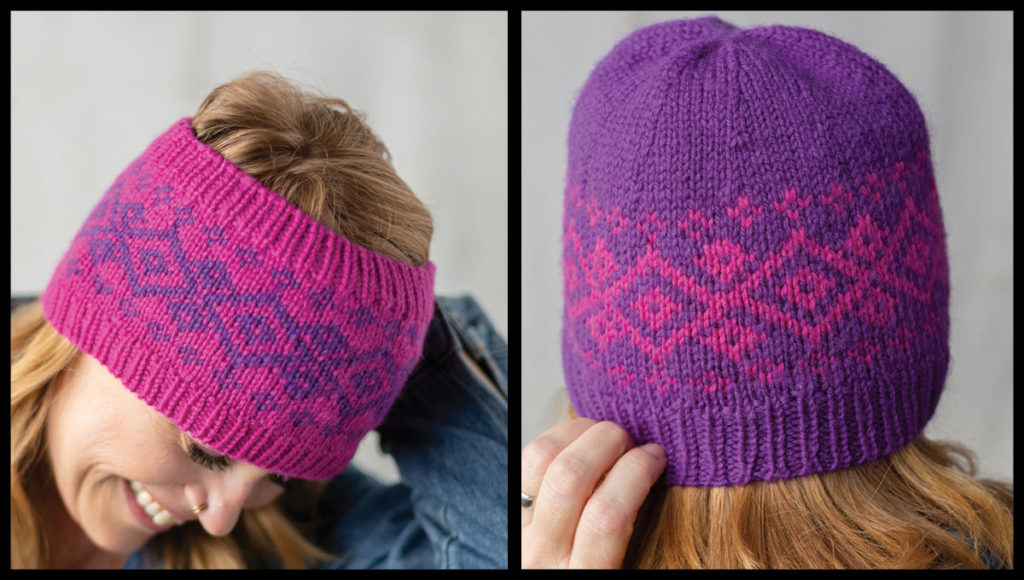 There are advantages to working stranded knitting in the round: The right side of the work is always facing you, so it’s easy to see the patterning (and make sure that it’s correct), and you don’t have to purl while managing two yarns. However, one problem with working in the round is the jog in the pattern that occurs where the beginning and end of the round meets.

What Causes the Jog? 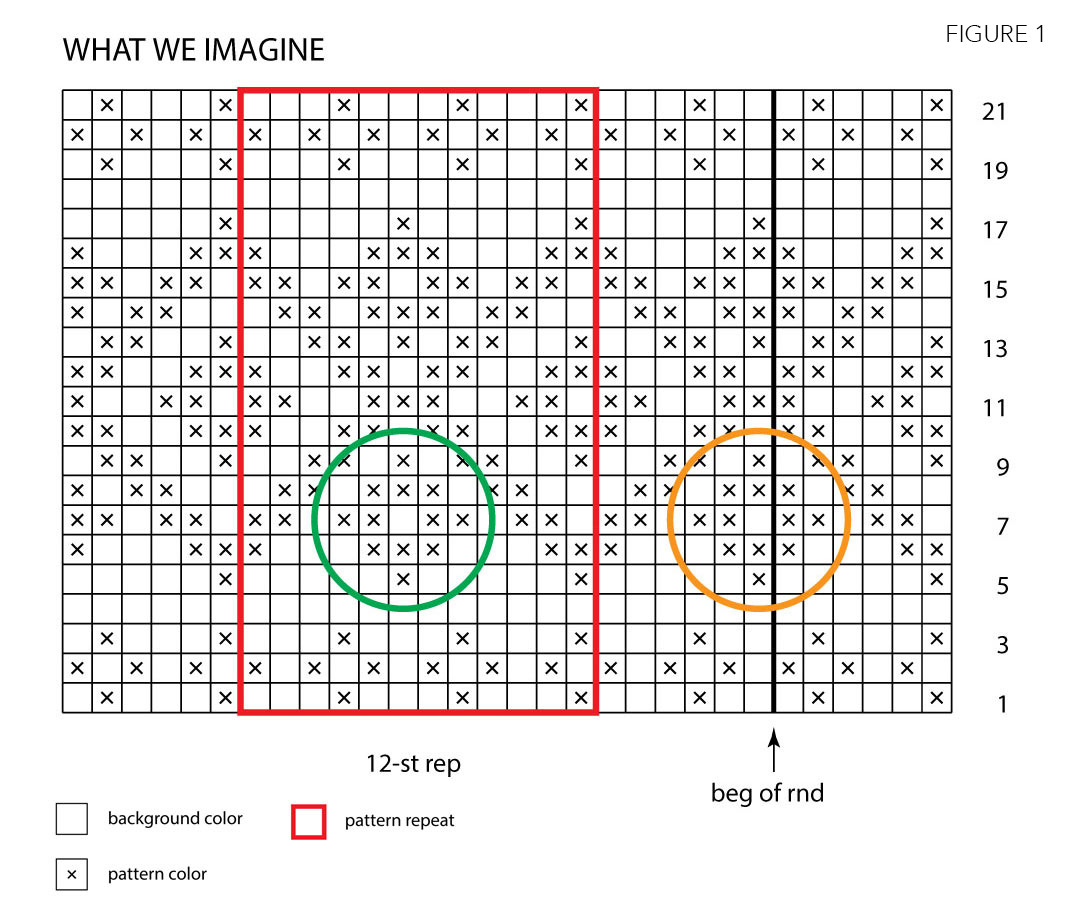 This causes the entire pattern to shift up a round at this point, and the pattern becomes distorted. This distortion is called a “jog.”

On the What Actually Happens chart (Figure 3), you can see that the diamond that is circled in gold actually looks more like a misshapen blob than a diamond. 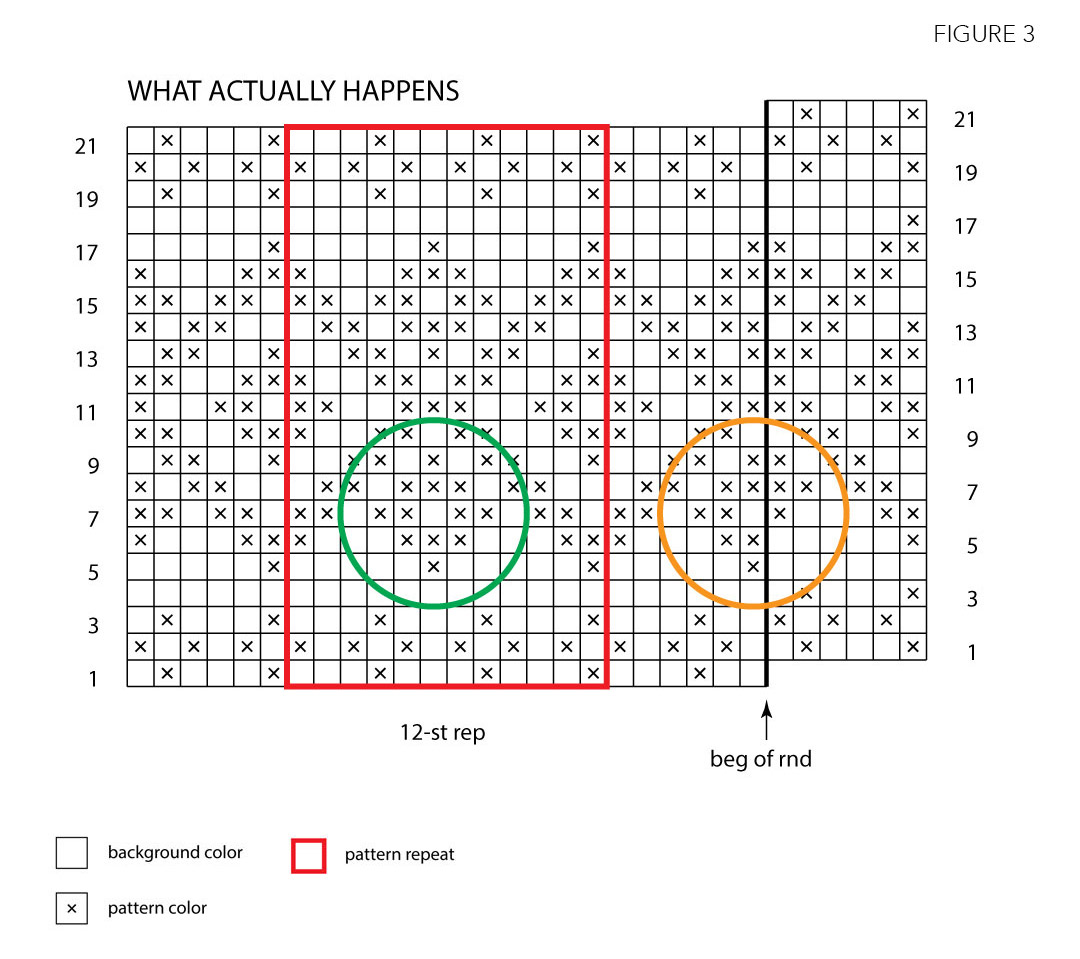 This is visible in the knitting in Photo 1. 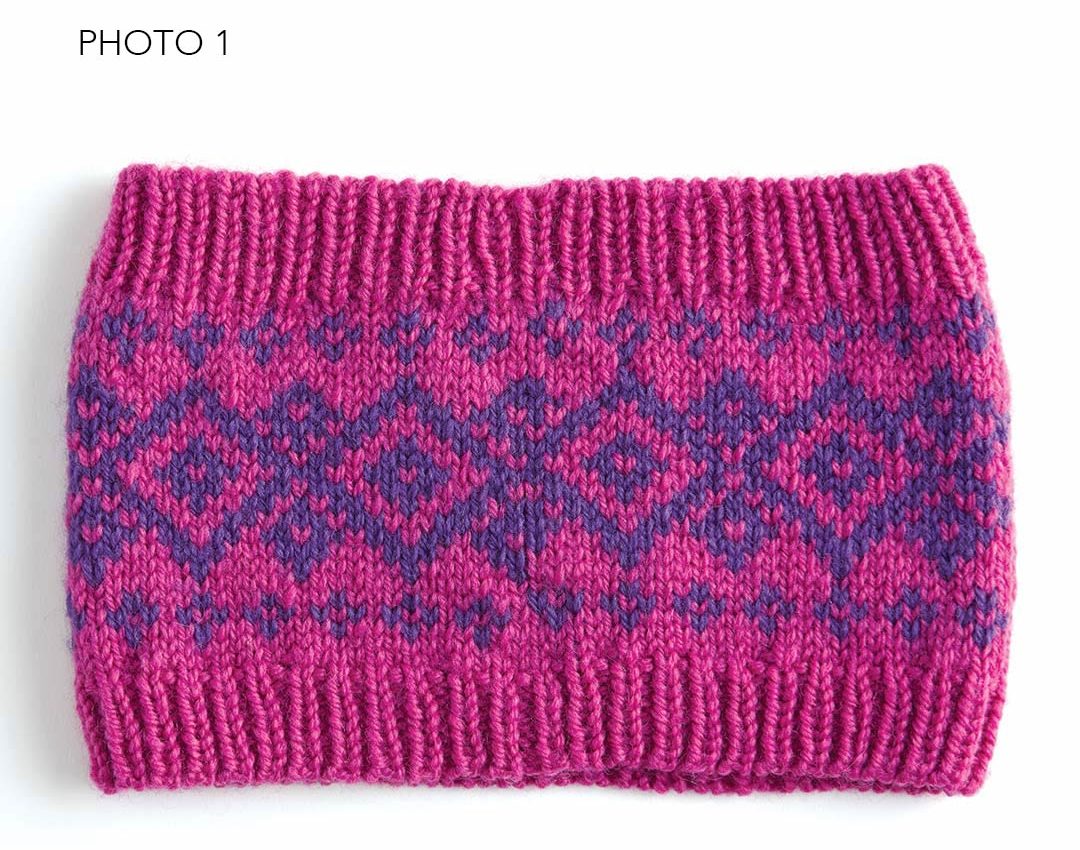 Methods for Hiding the Jog

Knitters use various methods to compensate for the jog, such as slipping a stitch to visually bring a color up from the round below (which leaves you with elongated slipped stitches in your pretty stockinette). Another method shifts the beginning of the round backward or forward so that it moves around the edge of an isolated motif, but constantly shifting the round marker can be somewhat cumbersome.

One of the easiest (and neatest) methods for hiding the jog is to adjust motifs that span the beginning of the round so that the motif is aligned across the beginning of the round. This works particularly well when you have isolated motifs—individual blocks of pattern that are separated from their neighbors by at least one background-color stitch—because part of the motif can be shifted up or down without being noticeable. If the motif is not isolated (if it isn’t completely surrounded by background stitches), there is sometimes a convenient place to adjust the design by adding pattern or background stitches so that the jog is less obvious. Charting the design on graph paper and playing with it is a good way to figure out the changes that are needed to minimize the problem.

The method described here for isolated motifs consists of drawing part of a motif to the right or left of the chart, then knitting from the revised chart.

Shifting a Motif Down

On the Motif Shifted Down chart (Figure 4), I’ve drawn the adjusted first half of the motif in green to the right of the “beg of rnd” line. The diamond is no longer misshapen. 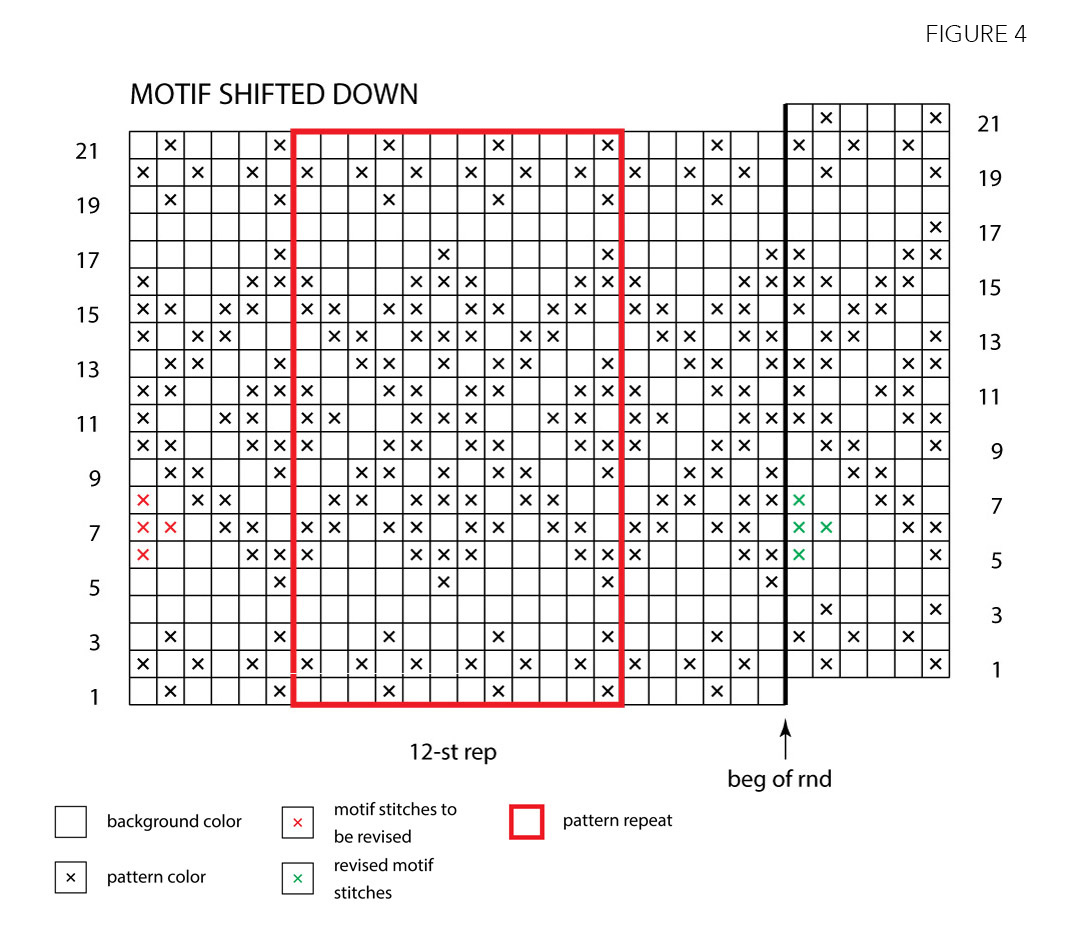 Shifting a Motif Up

The small diamond on Rounds 13–17 of the chart will also be distorted. In this case, if we shifted the right half of the motif down, it would run into the larger diamond below it, so we need to shift the left half of the motif up instead. These stitches—shown in red on the Motif Shifted Up chart (Figure 5)—fall at the beginning of the round, instead of the end. 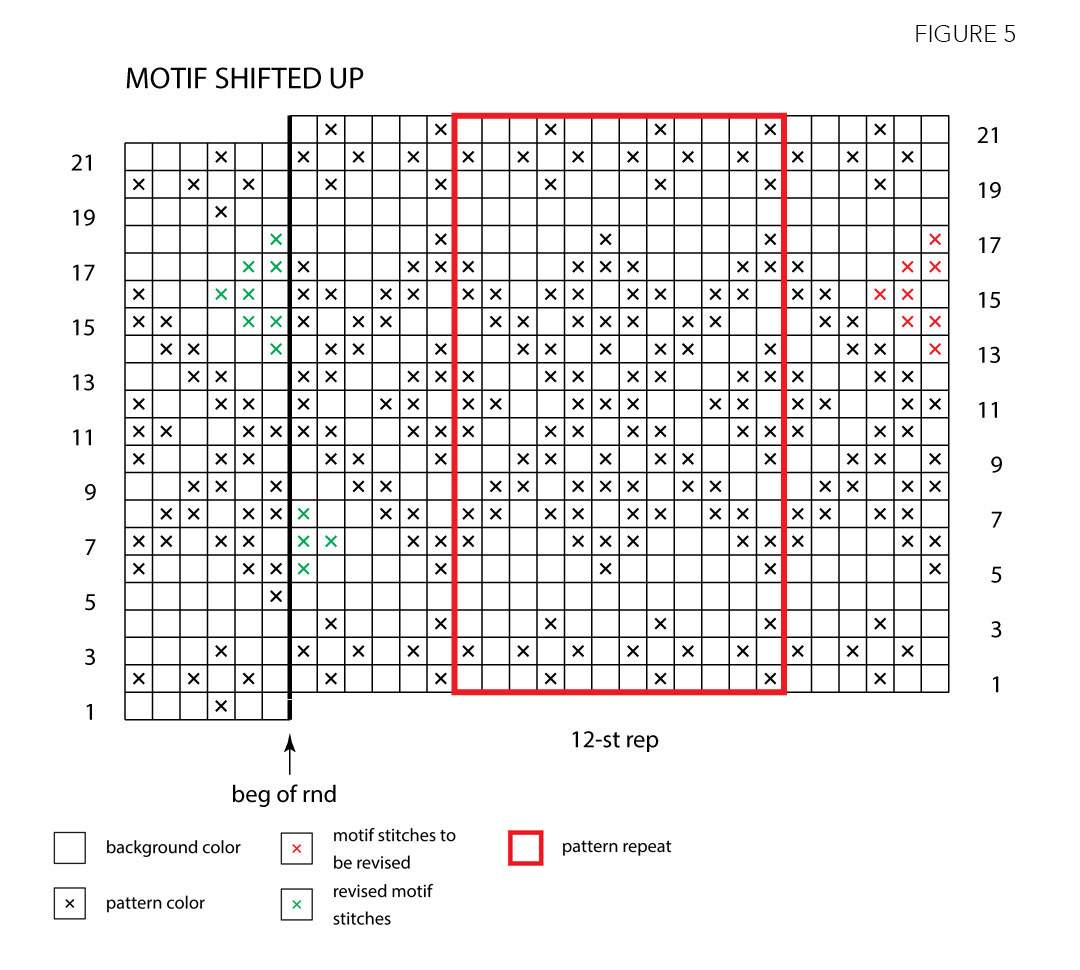 As you might expect, the technique is similar but opposite to shifting the motif down. Instead of drawing the shifted motif to the right of the chart, we’ll draw it to the left. On the chart, the adjusted second half of the motif is shown in green to the left of the “beg of rnd” line.

When working the chart, we only need to think about the changes when we’re near the beginning or end of round; the rest of the repeats are worked as usual. The Corrected Jog chart (Figure 6) shows how motif stitches can be added to the right or left of the chart. 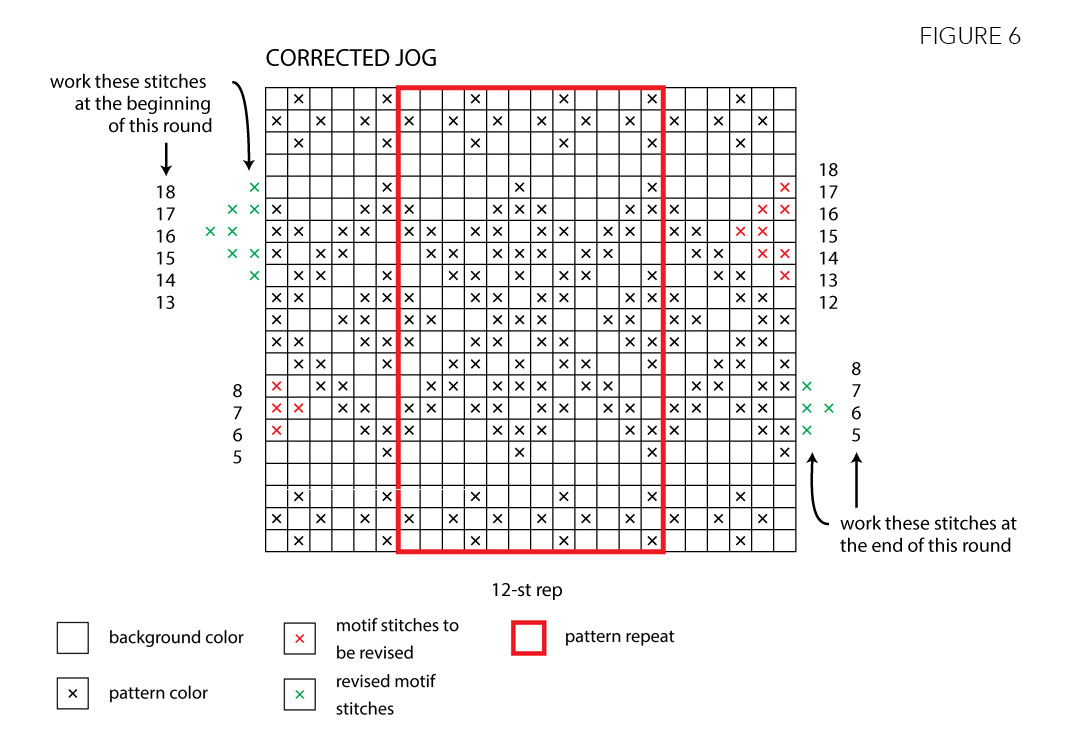 For the lower motif, the numbers to the left of the chart are the original round numbers and the ones to the right indicate the round that is ending (i.e., “5” on the right indicates the end of Round 5 and the beginning of Round 6). Work Round 5 of the chart until you’re a few stitches from the end of the round. The original end of Round 5 says to work five stitches as background stitches. But if you look to the right of the chart beside the round marked “5,” you see that the very last stitch of the round (shown in green) should be a pattern stitch, not a background stitch, in order for the motif to look correct. So the final stitch of Round 5 should be worked as a pattern stitch.

Round 6 is similar: In this case, the original chart (shown in red) says that only the last stitch of the round should be a pattern stitch, but the revision to the right of the chart says that the last two stitches should be pattern stitches.

In the knitted sample (Photo 2), you can see that the right edge of this motif has two background stitches between it and the large diamond, rather than just one. 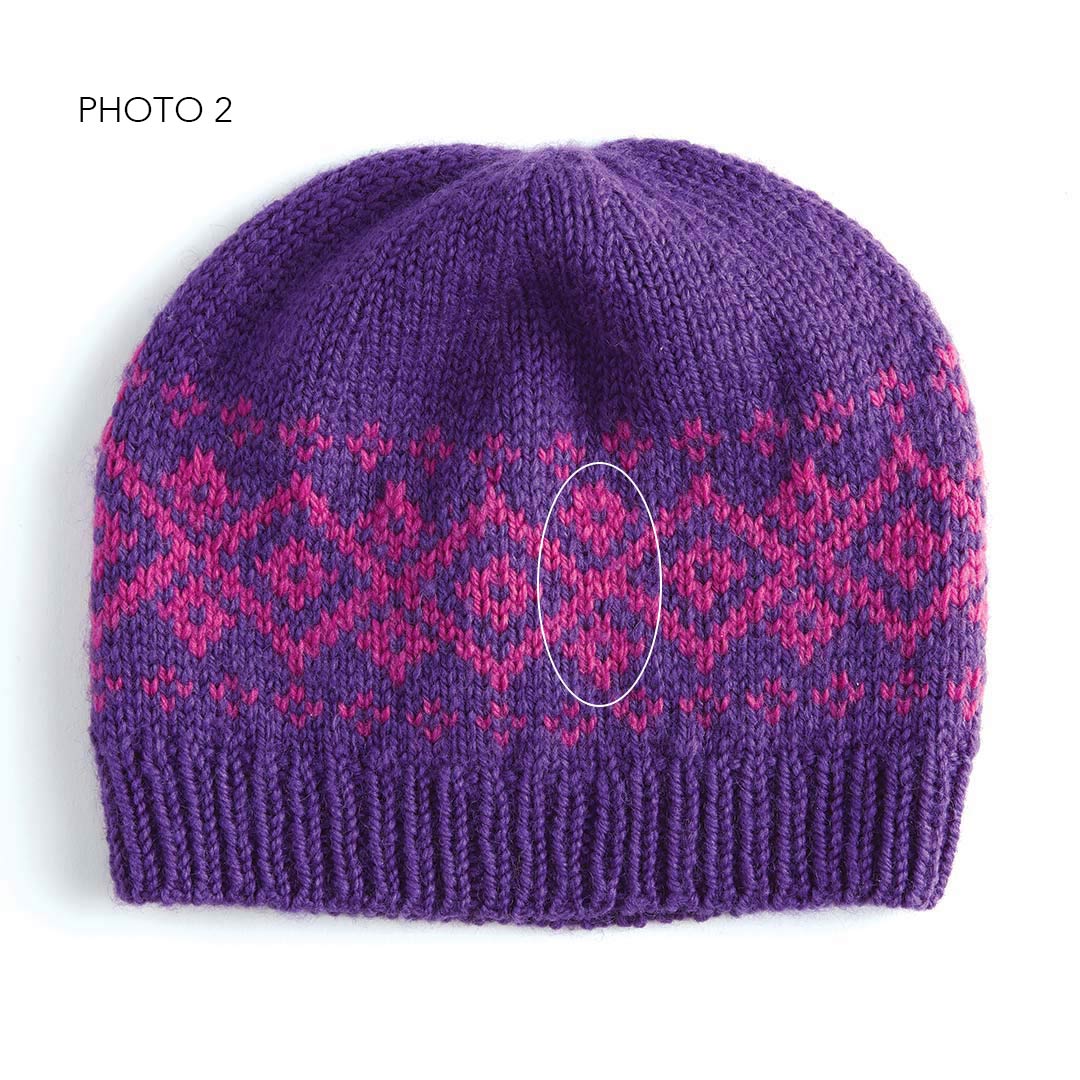 You can see in the circled section on the sample (Photo 2) that there are two background stitches along the left edge, rather than just one.

As we have seen, isolated motifs can usually shift up or down as needed to avoid a jog. But continuous motifs—ones that are connected for the entire round, such as the large diamonds at the center of the chart—can’t be shifted because there is no place to stop the shifting. If you tried to shift a continuous motif, you would shift for the entire round and still have the same problem (just one round higher).

I hope you find this method to be a relatively simple way to compensate for the jog so that your pieces will be beautiful from every angle!

Karen Frisa is a technical editor for Interweave Knits, knitscene, Wool Studio, Spin Off, and other publications. This article originally appeared in Interweave Knits Winter 2020.

Want to learn more? Check out these resources: 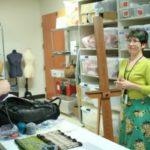