Have you ever tried knitting intarsia?

Have you ever tried knitting intarsia with 13 bobbins in use across one row?

Have you ever tried knitting intarsia with 13 bobbins across one row, while working seamless, modular construction methods and following intricate lace charts?

How about working those lace charts from memory at the same time as all the above? 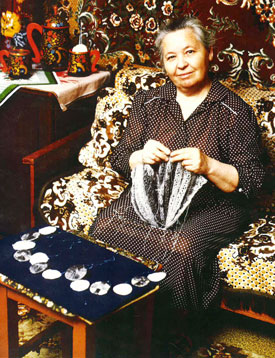 This is the amazing skill that Russian knitter Olga Fedorova mastered as a cottage-industry shawl knitter in Orenburg, Russia, during the mid to late 20th century. Here she is working on a two-color lace shawl with 13 bobbins.

Olga made and sold these lace shawls as part of a prolific cottage industry in Orenburg. Russian gossamer web shawls were a luxury item that people bought as finished goods for their own use. But Olga developed something different for that market…intarsia Gossamer web shawls.

Two-color lace shawls were an iconic Orenburg type earlier in the 20th century, but during wartime and a turn from non-essential luxury goods, the two-color tradition faded, and the skills needed to create those shawls was lost. Many years later, as one of the pre-eminent Orenburg knitters, Olga was asked by the local government to resurrect the style and figure out how to knit it. 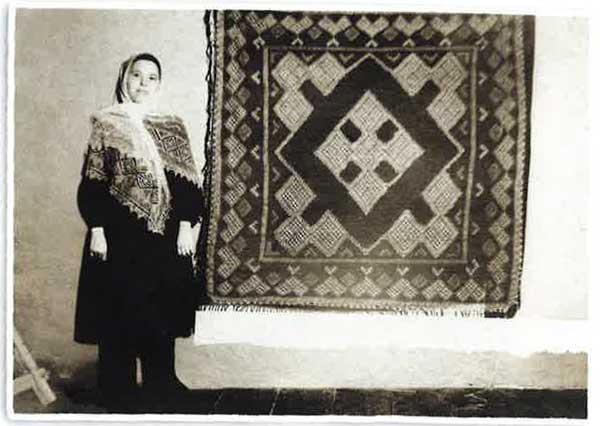 There are very particular techniques required to combine garter-stitch lace and intarsia knitting, including an unusual color join and clever bobbin-management to keep things organized (and to keep the knitting fun!). Olga passed these techniques onto her friend, business associate, student, and fellow Russian, Galina Khmeleva.

You may well know Galina as an Orenburg lace knitter herself. She has published and taught widely on the subject, and has starred in two beloved videos from Interweave on Orenburg traditions: Knitting Gossamer Webs with Galina Khmeleva and Spinning Gossamer Webs.

Olga’s intarsia lace techniques were a valuable secret that she guarded closely: she needed to be able to sell her finished samples, and her special methods were an asset in that regard. But in working closely with her and studying her lace shawls, Galina figured out some of the secrets. And Olga gave her blessing: Galina could one day share the secrets of two-color Orenburg lace knitting—once Olga had passed.

For years, Galina kept that promise. And now, the time has come, and she is ready to share Olga’s secrets, in hopes that knitters everywhere will be able to adopt them and create their own masterpieces:

Journey with me, Lisa Shroyer, longtime student of knitting and part of the Interweave editorial team, as I sit down at Galina’s home and learn the secrets from her very hands. Explore traditional Russian foods and shawl types as we talk about Olga’s life and her work. 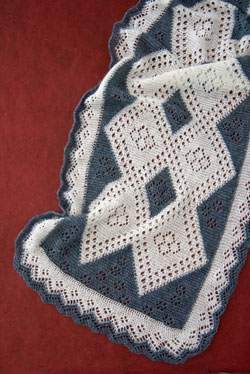 In addition to two-color lace knitting, you’ll also learn about shawl blocking with nylon cords (a clever trick!), using a lazy Susan to manage bobbins, how to use  yarn-cakes instead of bobbins, ideas for portable bobbin management, how to join seamless edgings and work short-row lace corners, how to cook blini (Russian pancakes), and finally, you’ll receive the pattern for the shawl above, designed by Galina as an ideal introductory project for new intarsia lace knitters.

It’s important to Galina to celebrate the history of her craft, and we are thrilled to bring you this new video workshop, Knitting Lace in Intarsia: The Secrets of Olga Fedorova, to teach, to commemorate, and to celebrate this precious knitting tradition and its discoverer, the late, great Olga Fedorova. 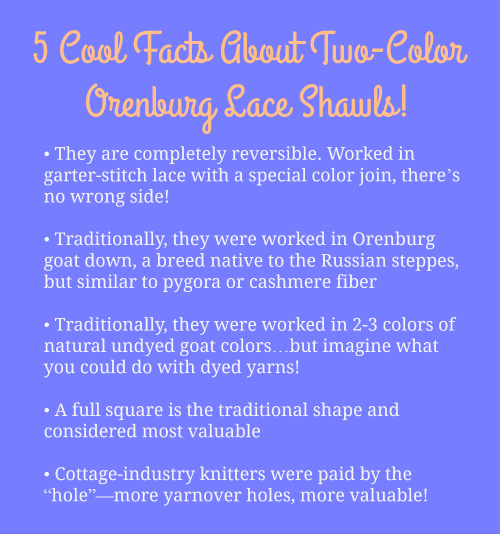