See the Big Picture at the Tucson Shows: Gem, Jewelry, Bead, Mineral, and Fossil Event of the Year 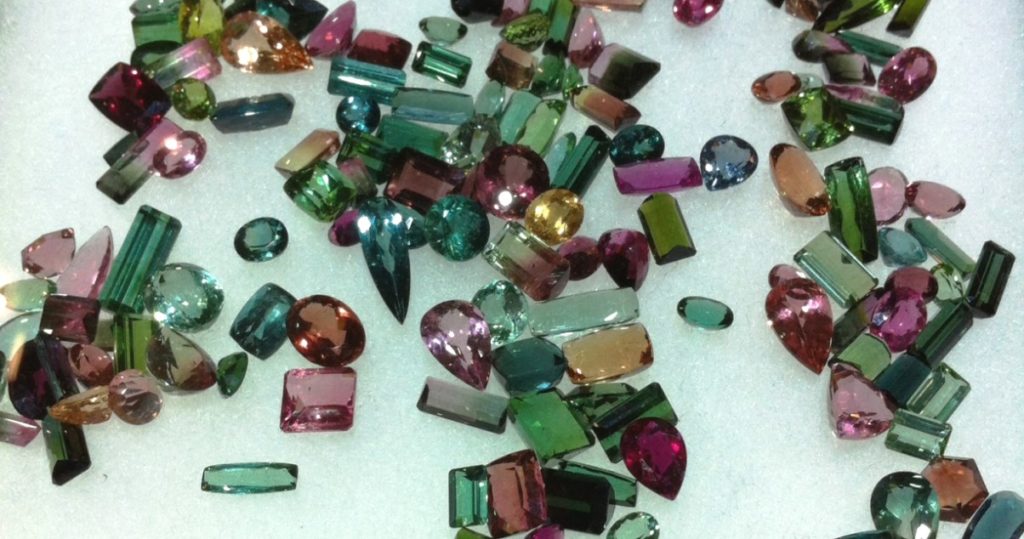 I remember peering so closely, walking all the way around them, carefully inspecting up and down. Noting minute variations in their rich red color, their smallest surface features, I was trying to commit to memory the appearance of a pair of tourmaline crystals in the finest possible detail. I realized I couldn’t appreciate them then. But I figured at some point I’d understand what all the fuss had been about.

ABOVE: Tourmaline comes in many colors and is cut into many sizes and shapes, These were on display at GemsMinas at the 2017 Tucson Gem and Mineral Show; photo: M. White

It was only my second or third Tucson, and that memory soon got buried under a flood of amazing treasures I kept coming across. Eventually, though, the scene popped back into my head, and I had to laugh. You can find richly colored, clean, well-formed tourmaline crystals that are inches long, sure, but these were in yardstick range. At one annual show in the late 1980s, the Tucson Gem and Mineral Society had displayed two (I think two) of the most stupendous tourmalines ever found. Discovered in 1978 in Brazil’s legendary Jonas mine, the crystals are world famous not for those tiny imperfections I was obsessing over. They’re exalted for being so good — and so big! The same pocket that produced the giants was also the source for a lot of terrific rubellite (red tourmaline) later cut into gemstones. 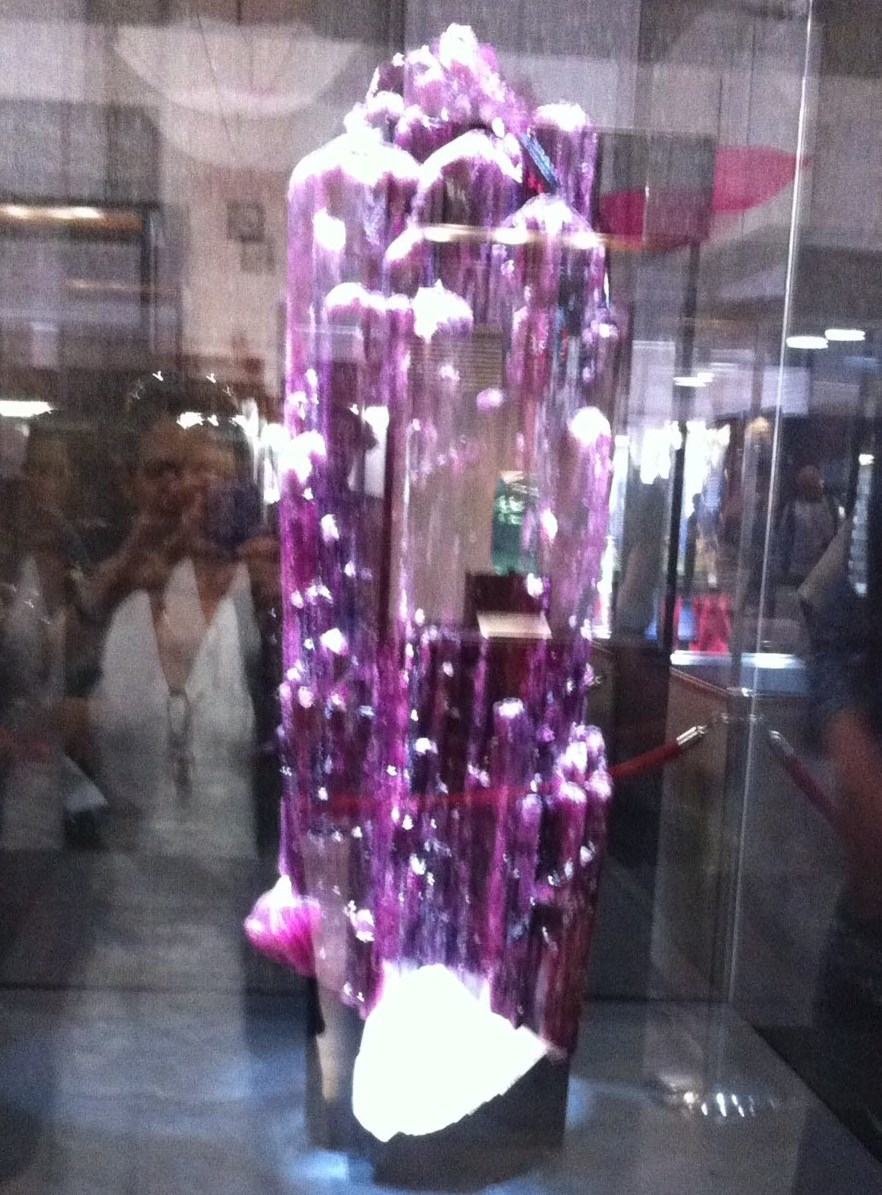 I am so not a photographer! With thousands of apologies, this is another of the three largest tourmalines found at the Jonas mine, displayed at the Tucson Gem and Mineral Show in 2018. Named the Taruga, it’s 85 cm or a little over 2’ 9” tall. This shot does no justice to the crystal, but for scale, I’m not quite 5 feet tall; that’s my reflection at left as I try to take the photo. 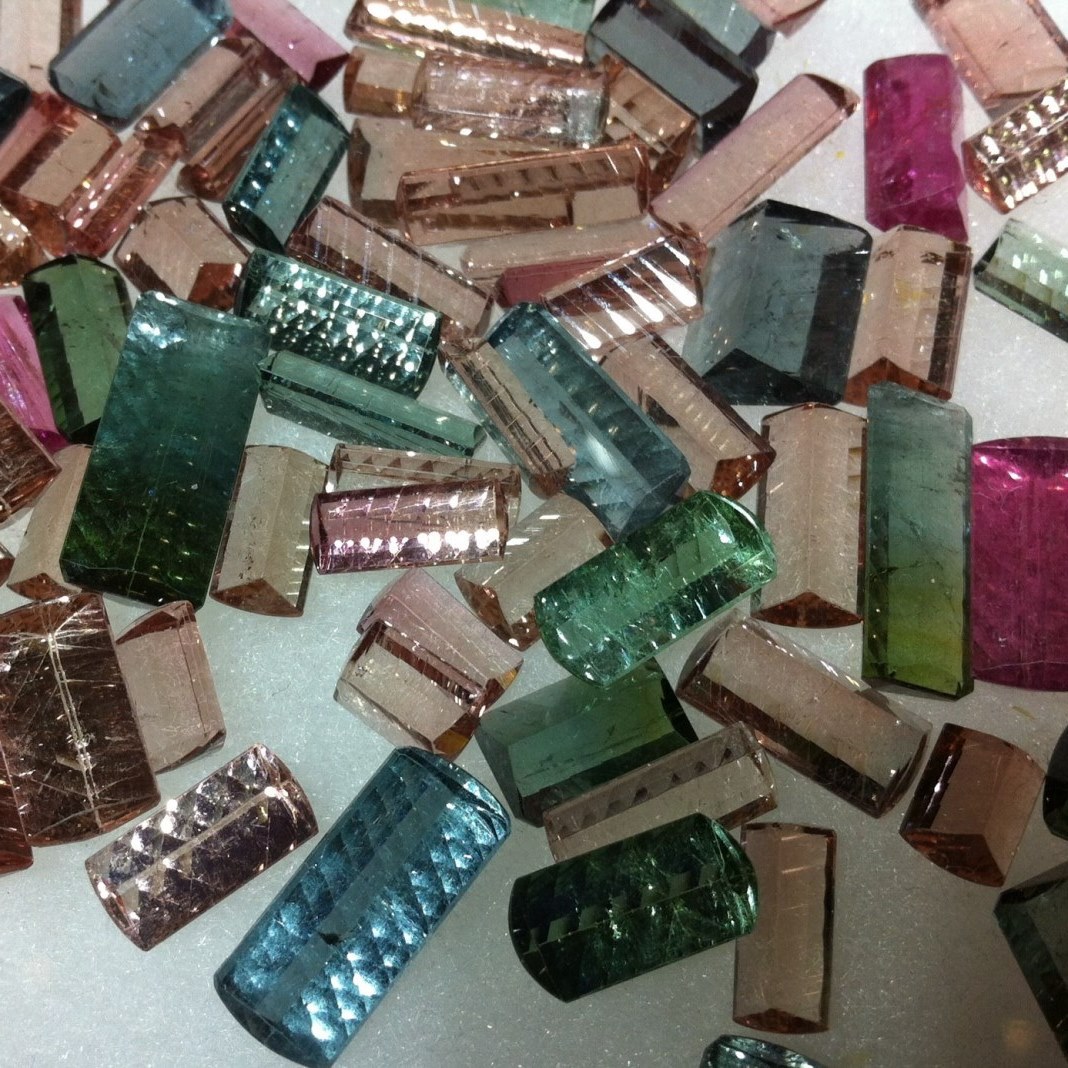 Tourmaline tends to form relatively long crystals and is often cut into gemstones of similar shape. The colors range not just in hue but intensity; these are paler than those shown at top. GemsMinas, Tucson 2017; photo: M. White

Seen one, you have definitely not seen them all — not in the world of gems and minerals. What I’d needed to appreciate the Jonas giants was context. So what if I’d never seen a tourmaline that big? Every time I turned around in Tucson I was looking at something brand new to me. First I had to see shelf after shelf, booth after booth, room after room after room of not-three-foot-beauties. Then it was obvious. 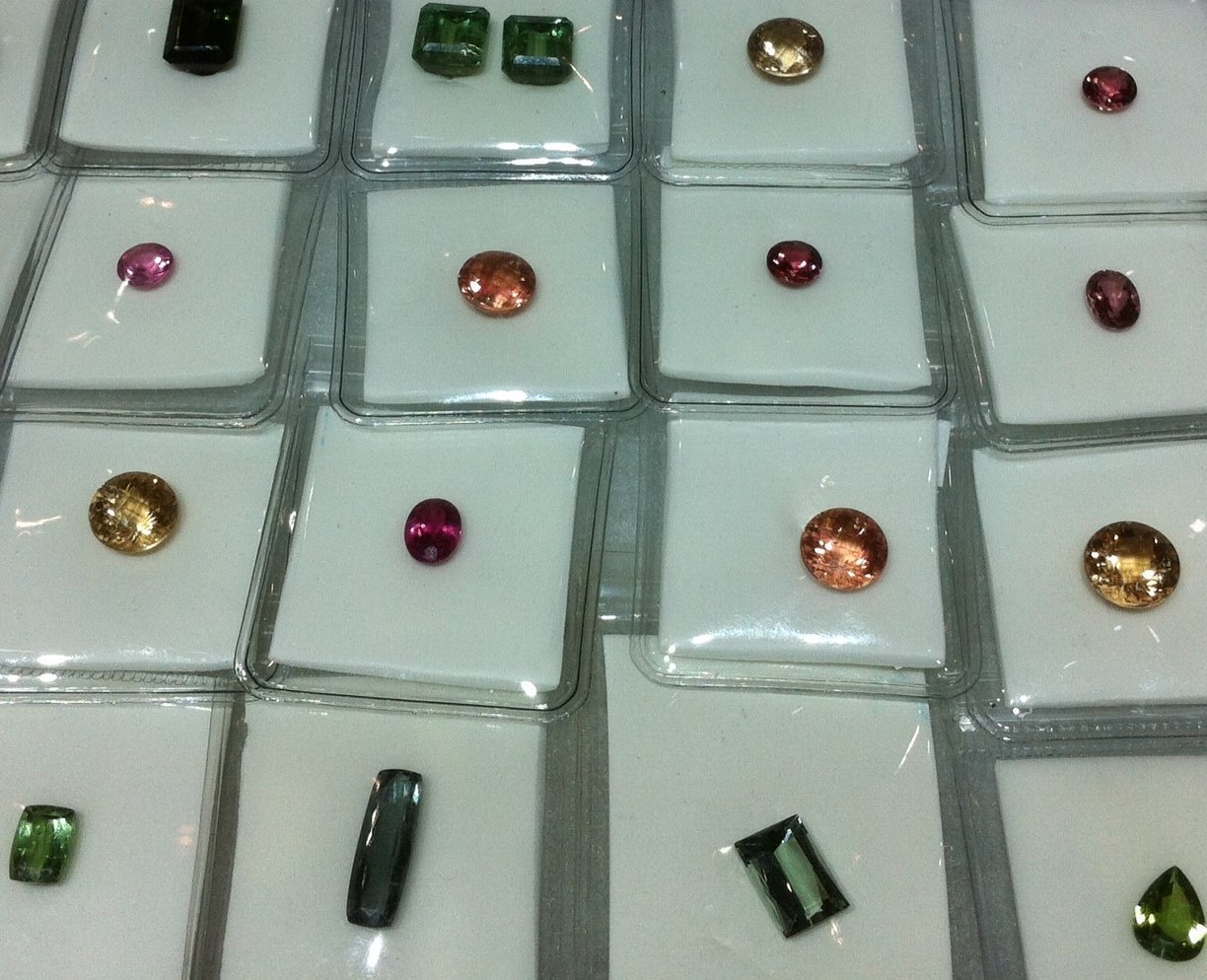 Gems need context, too. Some materials are pretty easy to identify by sight once you’ve learned what their distinctive characteristics are. Charoite, for instance, is a mix of minerals that give it a consistent appearance. That look is a rich purple flecked with black and lighter bits in peach, tan, or white, as well as the play of light called chatoyance. Lying side by side, each piece in a group shows a somewhat different pattern, but it’s easy to see they’re all the same thing. It’s also easy to see which ones have more intense color or optics. 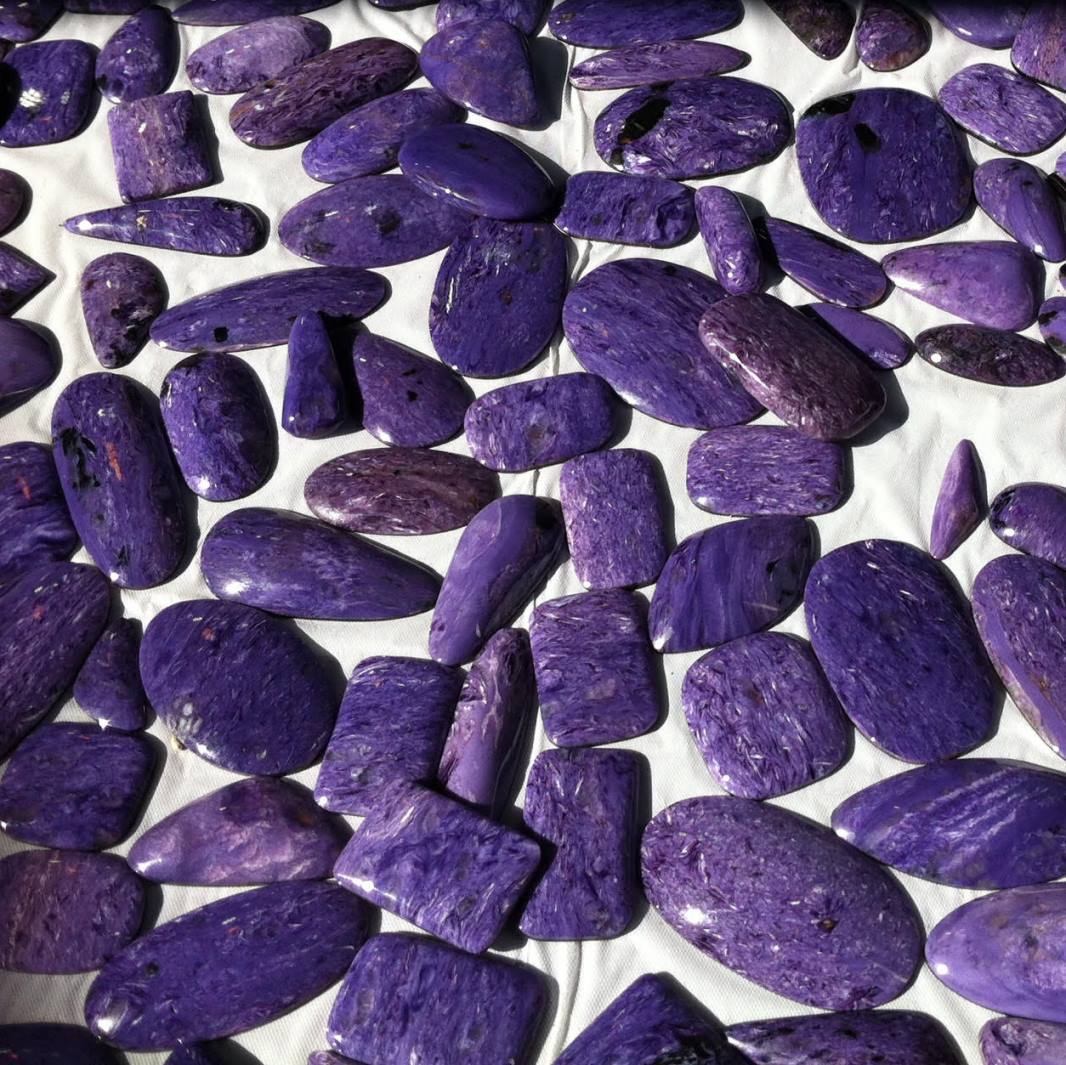 Other gem materials can show a complex pattern over many inches or feet of surface. Cut something like that into jewelry-size pieces, and each stone can look very different because you’re only seeing a part of the pattern. Madagascar jasper is a good example of that. It’s also called orbicular jasper because much of it reveals round or orb-like spots of green, pink, and tan, often one inside another. But sometimes the colors appear as splotches that aren’t particularly round, are more widely spread out, or are richer or deeper in shade. 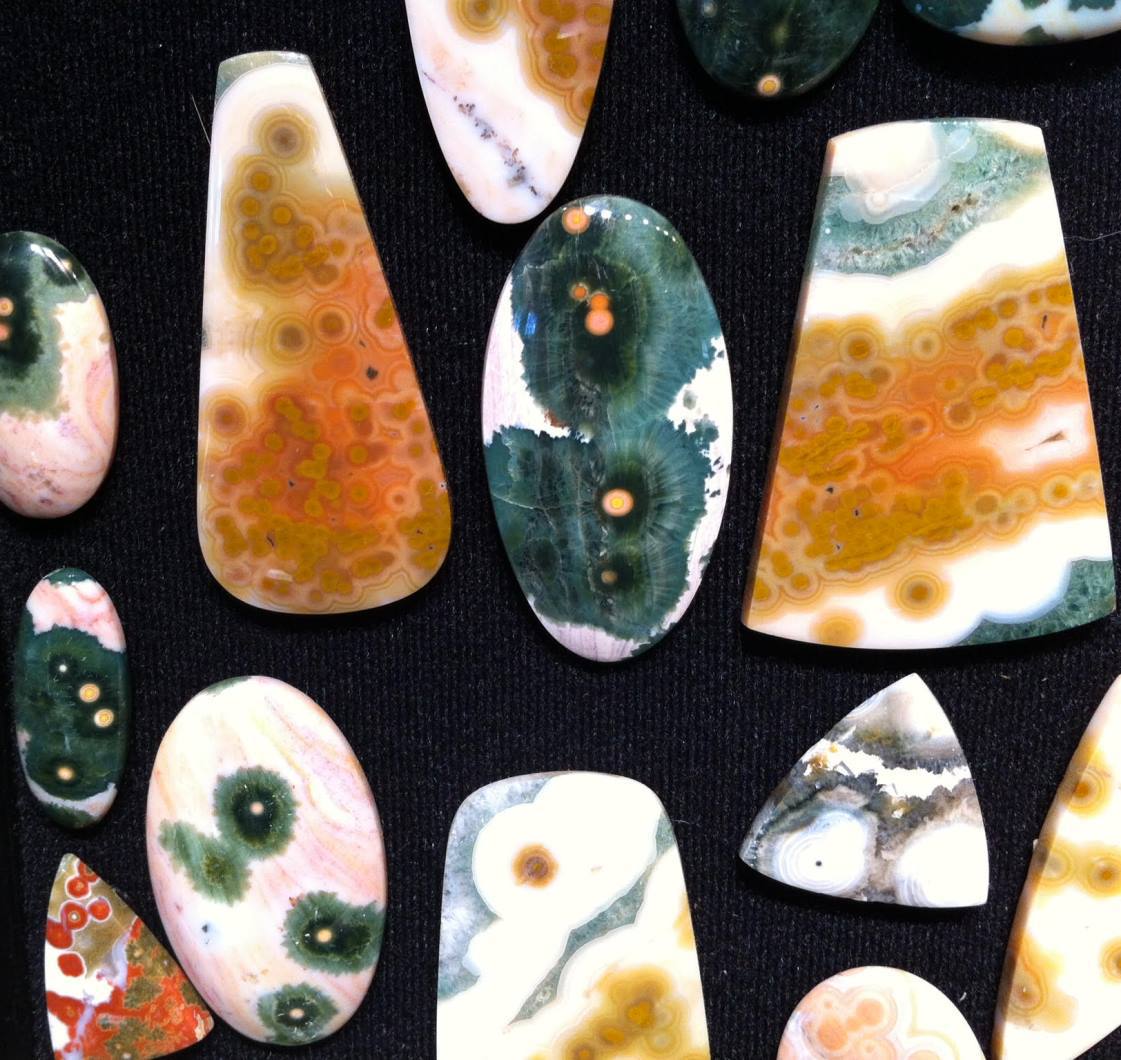 A small selection of Madagascar jasper cabochons. If you saw just one of these, you wouldn’t think that others would look so different. Barlows Gems, Tucson 2017; photo: M. White

Many natural history museums have collections of gems and minerals on display. These can give you a great start at getting a sense of what variety exists. You can go to local shows and see what’s available there. But there is no better environment than the annual collection of Tucson shows to give you the really big picture. 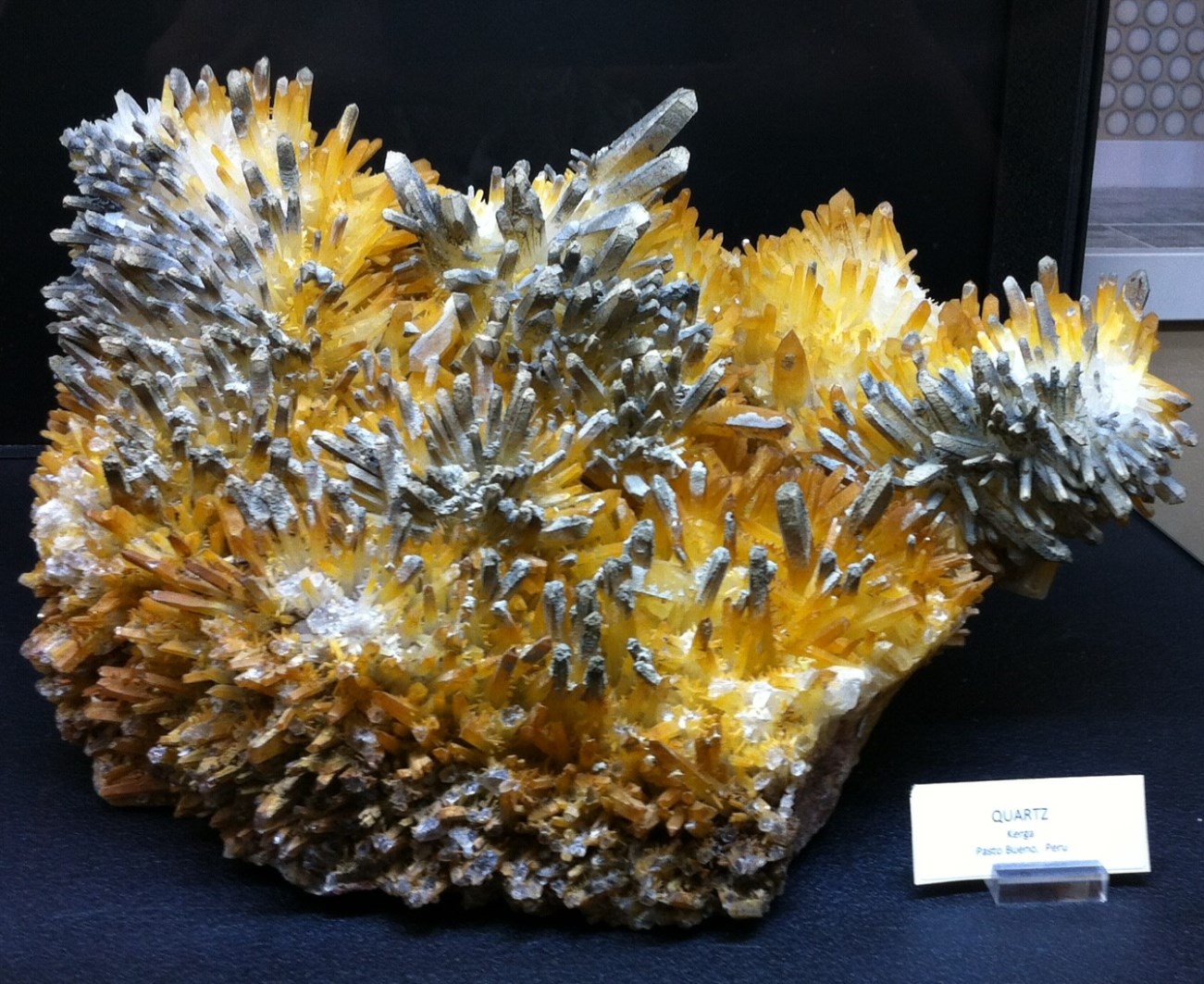 You may think of quartz crystals as being colorless, but quartz has zillions of personalities. This quartz crystal cluster is from Pasto Bueno, Peru, and I saw it at Crystal Springs at the 2018 Tucson shows; photo: M. White

At the 2020 Tucson shows, there will be over 45 venues and over 3,000 vendors selling gems, minerals, fossils, beads, jewelry, and related tools, supplies, and equipment. The Tucson Gem and Mineral Show, aka the club show, consistently brings in outstanding special exhibits from private individuals and museums from around the world. Experts from all over visit Tucson. Some events host expert presentations or hands-on classes. 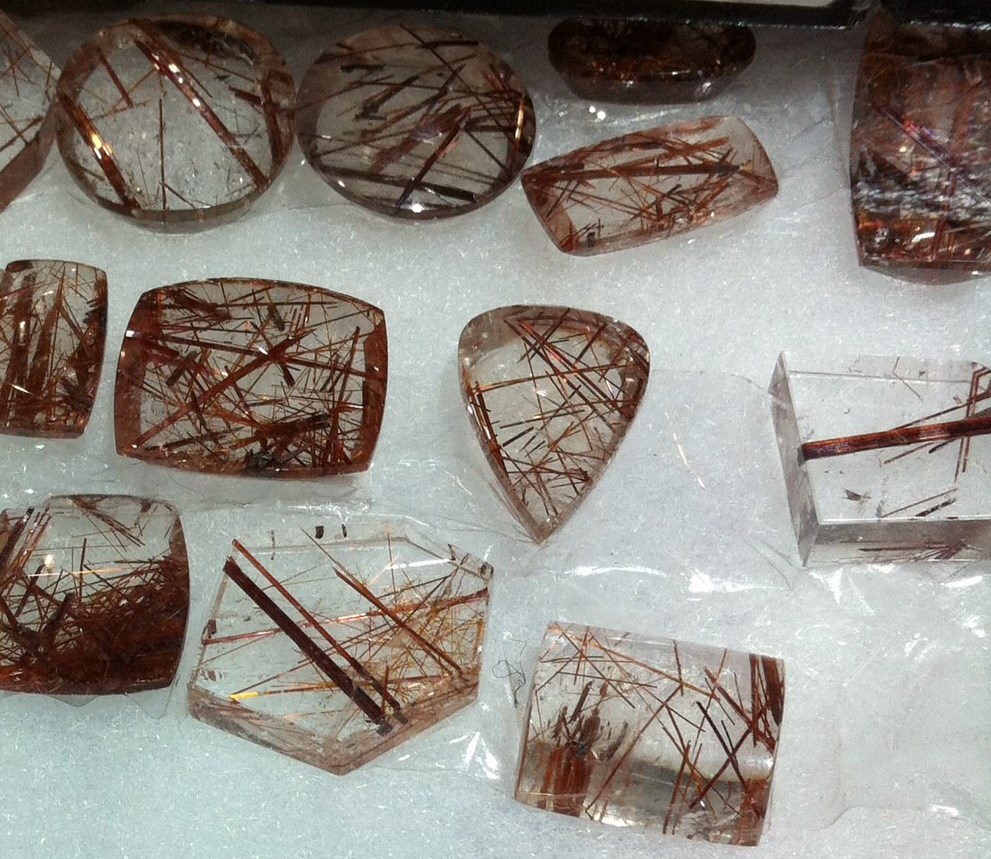 Vendors may offer a host of items, and their booths or rooms or tents are great places to learn about the scope of merchandise. Other sellers specialize in just one thing. Those spots are perfect for becoming familiar with the range of that thing: not just price but color, size, transparency . . . whatever that item comes in. It’s also a good bet that a vendor specializing in just one thing is something of an expert on it. If you’re there just to learn, be sure to let vendors attend to paying customers first, but don’t hesitate to ask questions there or anywhere. The Tucson shows are full of people who love what’s at Tucson and are eager for you to love it, too.

Get Ready for the Tucson Shows

The 2020 Tucson Show Guide is available for purchase now and for free at the shows. Learn more about the history of the Tucson shows.

And what’s that line on the Tucson Show Guide cover about a new contest? It’s Interweave’s Jewelry, Bead and Gem Arts Awards, and you can enter now.

Just like the Tucson shows, you never know what’s going to appear in the next issue of Lapidary Journal Jewelry Artist that will make your day. Subscribe and never miss any of it.

Be in the know with the 2020 Tucson Show Guide! 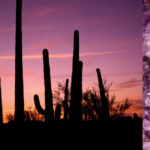