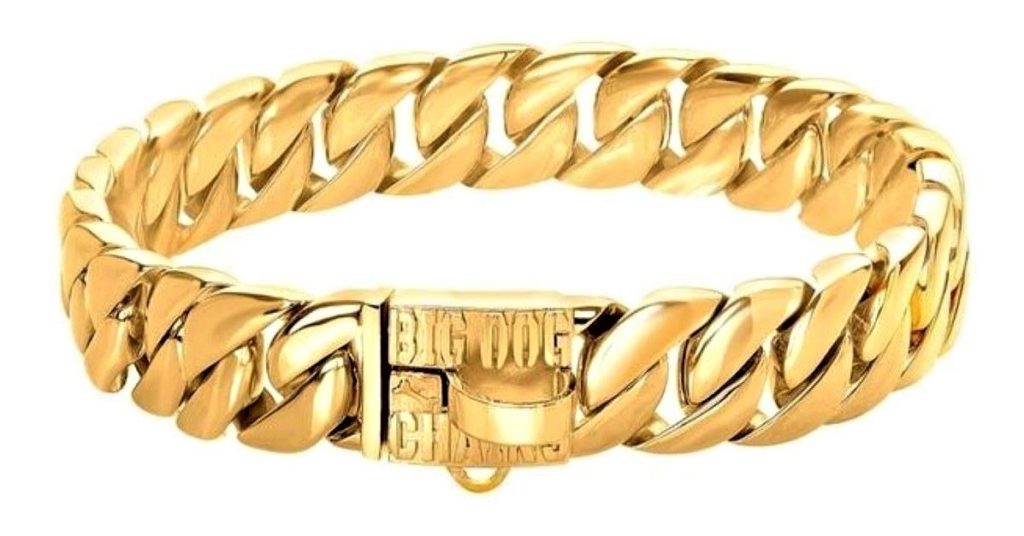 See the photo? Looks like a fabulous gold bracelet – and you can just feel its richness slipping around on your wrist as you glide your pedicured toes into your Louboutins, pick up your Gucci bag, and head out the door in your very best Dior. Heavy and luxurious as only an experienced jeweler can make it. There is nothing that feels quite like real gold, is there?

ABOVE: Looks like a heavy gold cuff, but it’s made for big dogs. Credit: bigdogchains.com

Except, this pricey design by Canadian jeweler Miguel Del Moral is for dogs. As in “arf, arf.” And they’re expensive. A leash and collar set can cost $750. Add a custom tag and pay even more. Or how about one in 10K gold for $35,000. Or a furball necklace studded with diamonds. 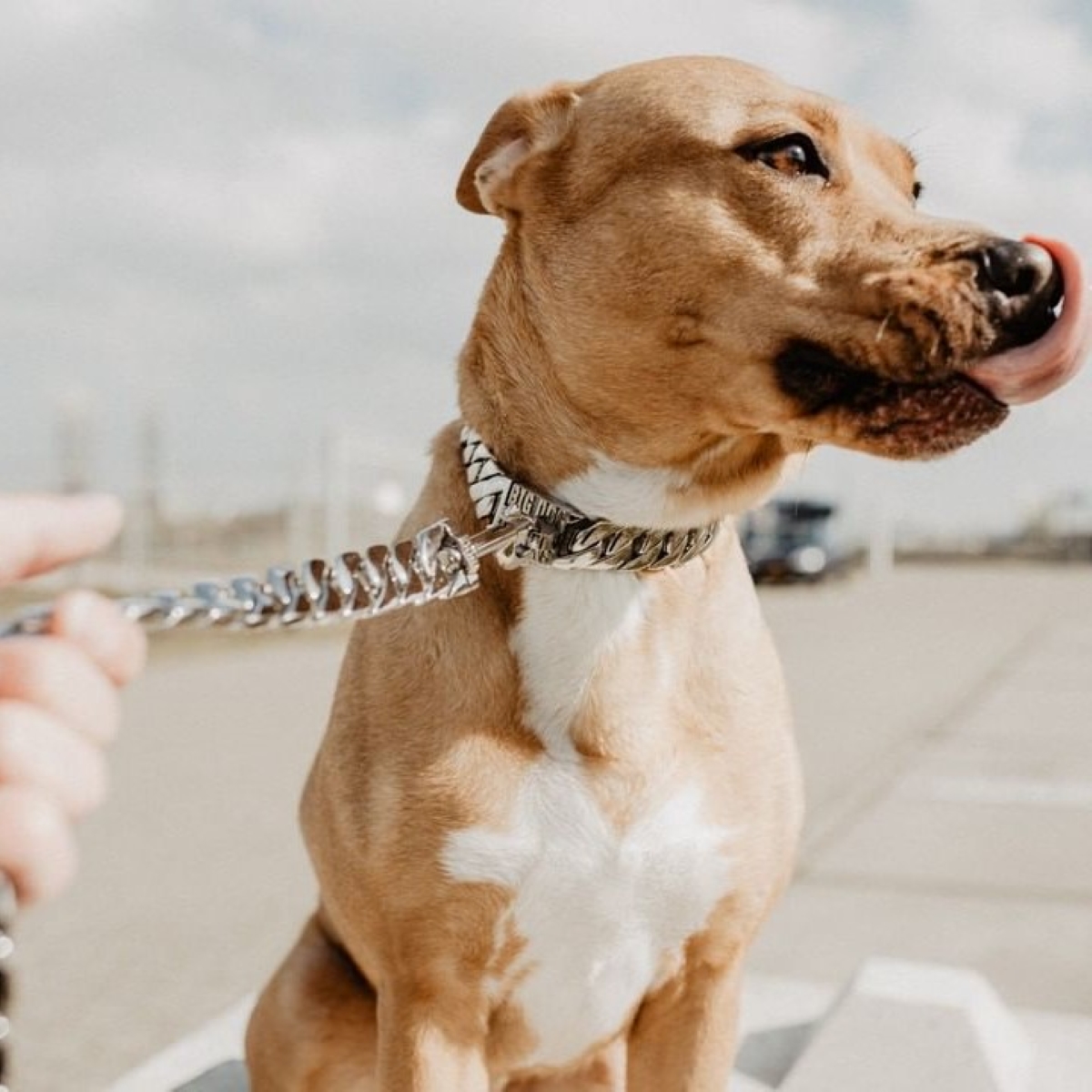 But, for the money you pay, you can expect two things: 1) The collar and leash will be strong enough so that you can control your pet. And 2) Owning this spectacular jewelry will put you in the good company of global rappers, musicians, and other celebrities. (Hint: J.Lo and Mike Tyson.)

Del Moral, whose parents manufacture jewelry near Montreal, Quebec, Canada, came up with the idea five years ago. He brought his rescue pit bull, Maui, to work one day and made a collar for her.

To his surprise, reaction was immediate.

“Everyone went, “Wow! What is that?” he recalls. So, he searched online to see if anyone else was making oversized chains for large dogs. He found nothing.

“I was sure when I did this for Maui there must be something on the market, and there wasn’t,” he says. 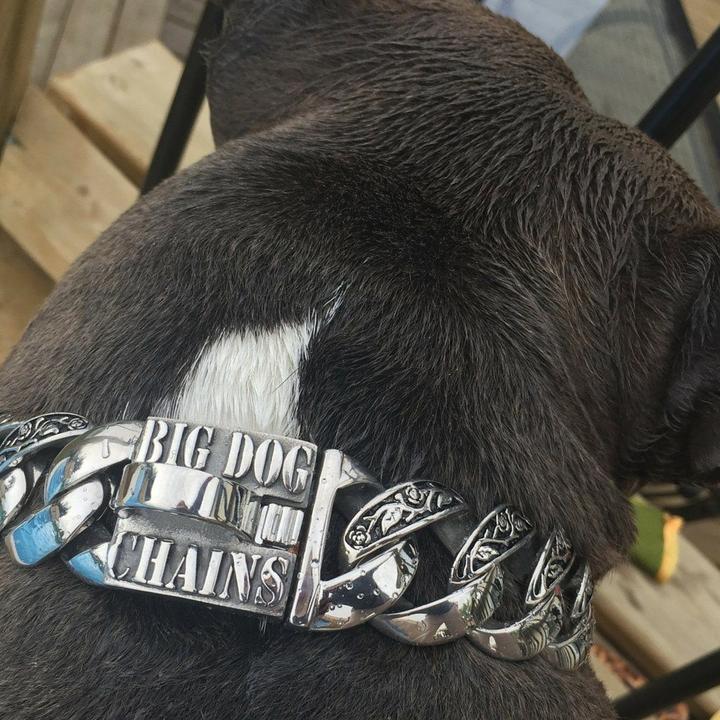 So, he worked on the design a little more. Since he possessed a controversial breed of dog, Del Moral wanted the collar and leash system to be strong enough to allow owners to control their pets – especially trained 40- to 100-pound dogs, like dobermans, pit bulls, bull mastiffs, and bull dogs. And he needed to develop a better clasp – a locking system for safety.

A year later, Del Moral’s dog jewelry idea had grown into a sideline business. He had a partner, Justin Low, to handle the internet and marketing, and had launched a Kickstarter campaign, which raised $15,000 almost overnight. His product also appeared on a Canadian version of Shark Tank.

“That helped to blow things up,” he says.

A Closer Look at Dog Jewelry

The super-sized Cuban link chains are fabricated out of 316L-grade stainless steel – a material that is much harder to work than gold or silver, he says. The silver-colored version is polished stainless steel, while the yellow collar and leash are gold plated. Del Moral also offers an array of powder-coated colors, rose gold and special textures.

“They’re actually very strong and durable,” the 38-year-old says. So much so, Del Moral offers a lifetime guarantee. The chains do not rust or tarnish, or leave black marks on a white dog’s coat. Del Moral also offers to resize the collars in the event a dog grows or gains weight. 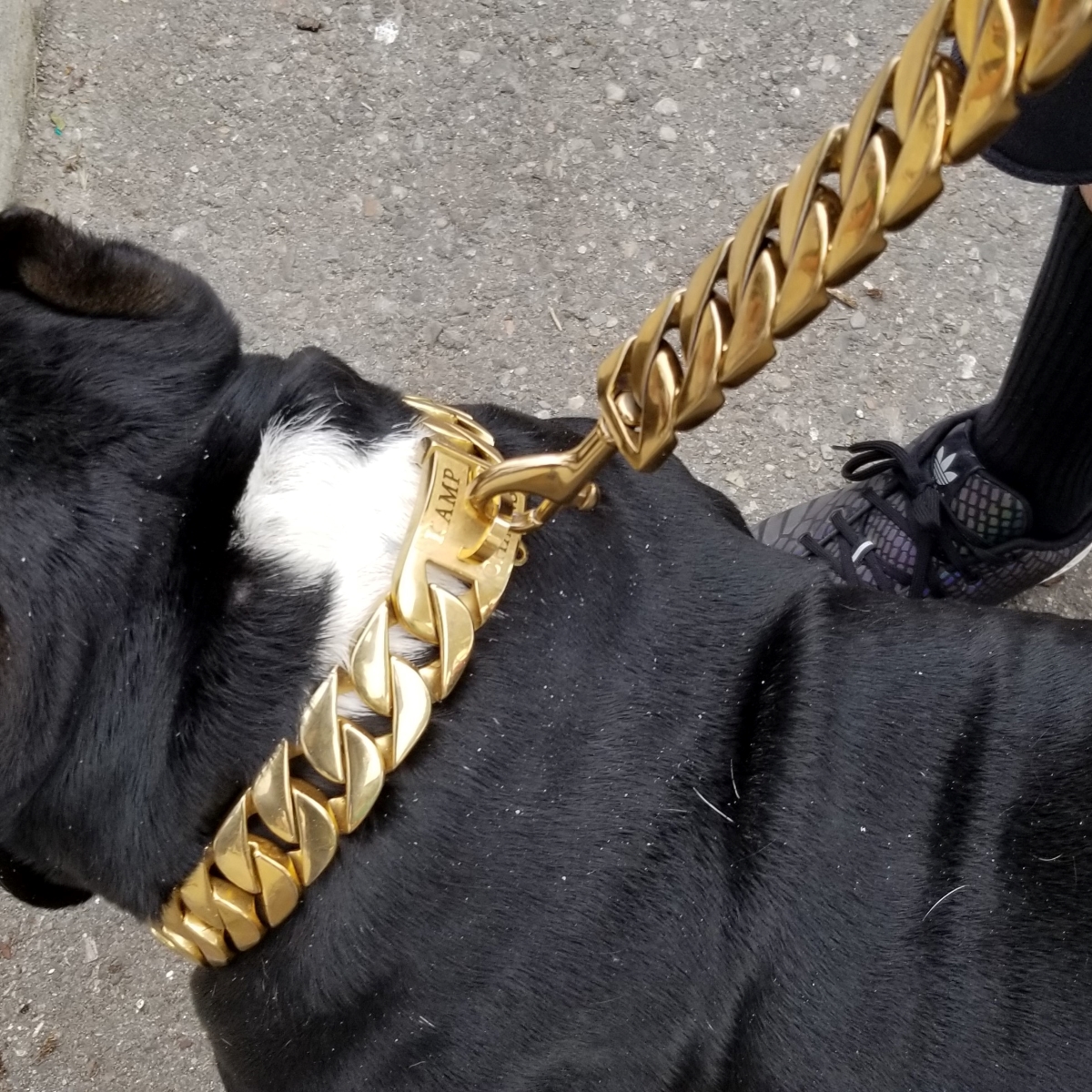 For Little Dogs, Too

Smaller dog owners also are in luck when it comes to luxury.

“We say the little dogs got jealous and we have to do a chain for the little guys,” he says.

Del Moral runs the dog collar business with a staff of six employees, and on occasion answers customer service calls himself. That is, when he isn’t running the jewelry store his family also owns.

He also wholesales the dog jewelry line to other jewelry stores.

“Jewelers love it, because they are looking for something new and different,” he says.

But in the dog-eat-dog world of jewelry making, there are imitators. Del Moral says that 10 to 15 different manufacturers in China are busy knocking off his dog jewelry designs at the moment. And it is easy to get fooled. While I was a tourist in Detroit, I spotted a man and his family at Eastern Market and was awed by his bull dog’s chunky collar. The man told me it was made by Big Dog Chains, and let me snap photos for this blog post. But when I showed the image to Del Moral, he identified it as one of the knock offs.

“They break. Mine have a lifetime warranty,” he says. “We’re known as the dog jeweler.”

Betsy Lehndorff has been writing for Lapidary Journal Jewelry Artist since 2010. You can reach her at betsylehndorff@gmail.com. 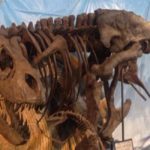 What’s the Oddest Thing You’ve Purchased at the Tucson Shows?