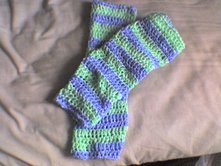 These great legwarmers use a color changing, self-striping sport weight Bernat yarn that has a crinkle to it. Super soft and oh so fashionable.

Sport weight Bernat yarn in Splash Stripes used about 1/2 a skien for the pair.

length from knee to ankle on a 10 year old, width 30 stitches or to fit the largest part of the calf.

I really never calculate gauge, but I used a nice fat K hook. Obviously the smaller the hook the tighter the stitch and I wanted these to be done quickly and have a slouchy look to them.

Note: this size is usually good for child/teen. Increase beginning chain by 5, or 10 to make med, or large sizes, or make a chain and wrap it around the largest part of the calf and count how many chains it is.

This is just a general pattern and can be altered to fit any size legs. If you want them longer add more alternating rows, but make sure to taper down just a little the last 5 rows so they are not too loose at the ankle, always end with a hdc row then finish with a sc row.

The author has licensed this page under a Creative Commons License. Some rights reserved.