Crochet in the field

In my latest sporting venture, laceweight meets heavyweight. Specifically, I was sitting in the bleachers watching the women from Carolina take on the women from Duke in lacrosse. Facing a laceweight deadline (really, there are so few jobs in which one faces a laceweight deadline), I was wielding a hook while the women below wielded their sticks. It's hard to say which is more dangerous — I was less prone to bruising, but what if I dropped my hook down the tall bleachers? I'd definitely lose points there. 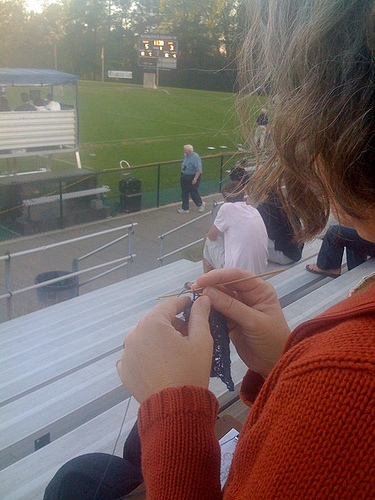 Here's what I pack for crochet in the field: A bag, to hold the yarn ball, so it doesn't roll away; a small clipboard for the crochet chart; a back-up hook in case I do drop it down the bleachers. In truth, you miss a lot of the game when you're crocheting, but supportive people around you can keep you up to speed. (Carolina won, 9-7, earning them a number 2 seed and a bye to the semifinals of the conference tournament. Just so you know).
The next morning found me on a smaller set of bleachers at a smaller field with smaller players. As it turns out, I dropped my hook toward the end of the game. I was crawling under the bleachers rooting through the tall grass, when a fellow asked what I was looking for. "A crochet hook," I told him. He looked at me, dumbfounded, like, "Couldn't it be something easier, like a contact lens? Something that I know about?" But then he looked down and said, "There it is!" He was immensely pleased. As was I. Score!
What obstacles have you faced while crocheting in the wild? Do tell.
Happy crocheting, wherever you choose to crochet.