7 Ways to Turn a Jewelry Shopper into a Buyer

7 Ways to Turn a Jewelry Shopper into a Buyer

If you sell your jewelry at shows, you might want to find out how a pretty disciplined and seasoned professional showgoer like me winds up becoming a customer, too. You probably know these things in your heart already.  But if you're not a professional salesperson, it's easy to forget what you're supposed to do in the anxiety of that performance moment. 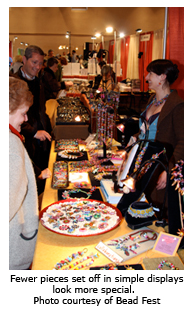 1. Display less.  For me, the rule is "Easy does it":  less selling all around is more effective. A couple of years ago at Bead Fest Philadelphia, for instance, a small case of bracelets did me in.  There weren't more than seven or eight of them laid out on a black velvet pad and that was the beginning of my downfall. I always find a smaller display more appealing than one crammed with jewelry on every square inch of available surface.

2. Encourage looking.  I might have just lingered over those bracelets and moved on to the next booth if no one had paid me any notice or if someone had pounced, pulling bracelets out and trying to put them on me. But no, the bracelets stayed where they were while I studied them through the glass.  Only when I looked up did an assistant open the case and quietly lay the velvet pad in front of me.

3. Ask not what they like: Ask what they like best.  Did I want to see that one with the silver spirals, or was I looking at the one with patterned beads of brown, tan, and black next to it?  I'd had no intention of buying any bracelet, but once gently invited to start choosing my favorite, that's exactly what I did.

4. Offer alternatives—not too fast and not too many.   After I'd picked up the one with the earthy palette, 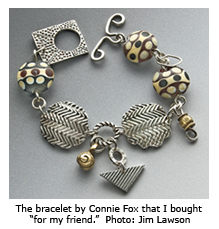 fingered a couple that were more brightly colored, and was shown another muted design that hadn't been out, I migrated back to that earthy one and tried it on. It looked great.

5. Help justify the purchase.   As much as I liked the bracelet, I knew I'd been drawn to it because I could picture my friend Suzanne wearing it, it was so her taste, and I began making noises about getting it as a birthday present for her. Everyone fussed over what a great friend I must be. 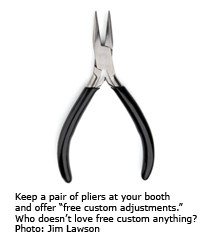 6. Throw in an extra.  Then I decided it would be a little big for her just as it was for me, since we're about the same size. No problem, the maker pulled out a pair of pliers and offered to remove a link on the spot and put it back on as an extra dangle.

That did it. I bought the bracelet, though in the end I kept it for myself.  In my defense, let me add that at another booth I soon after bought a polymer pendant I really liked and gave that to Suzanne—and unless she reads this, she has no idea that the bracelet she's admired on my wrist several times was ever supposed to have been hers!

7. Promote and sell on the Web.
Want to improve your sales at shows and online? Watch for "Building an Online Following" coming up in the August issue of Lapidary Journal Jewelry Artist, along with expert advice on ergonomic hammering, successful annealing, what's cool about designing with fossils and how to set one into a pendant, and so much more.  The August issue is available at the Interweave Store, where you can also get an even better deal by subscribing.  Hey, we know about throwing in an extra, too!